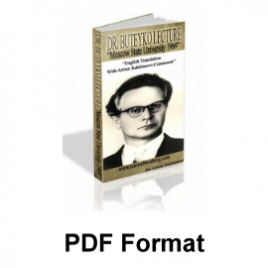 This lecture took place in the largest auditorium of the Moscow State University (named after M. V. Lomonosov). This special event was organized for the staff of the University. It was likely the classified nature of Buteyko’s research during the 1960s (for first Soviet spaceship missions) and exclusiveness of his discoveries that predetermined the organization of this lecture (there was one more, in 1972). Hence, it was definitely a very large and significant event for the scientific staff of the Moscow State University, the most famous and prestigious University of the USSR. Try to imagine: the leading scientists, Professors, Academicians, and Directors of numerous Institutes of the most famous Soviet University are gathered together to hear news about Space Program discoveries that have benefited medicine.